Nails Through the Ages 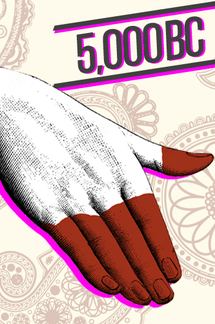 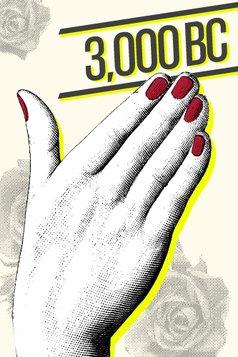 3000 BC: The Chinese formulated a nail polish enhanced with crushed Orchid and Rose petals to give shades of pink to red.  Unfortunately, the lacquer had to dry for hours, sometimes overnight, to have a properly pigmented nail. 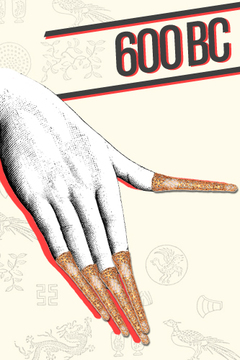 600 BC: Aristocrats during China's Chou Dynasty wore flashy gold or silver covers on their long nails.  These blinged out nail guards protected their nails and were symbolic of wealth and leisure. 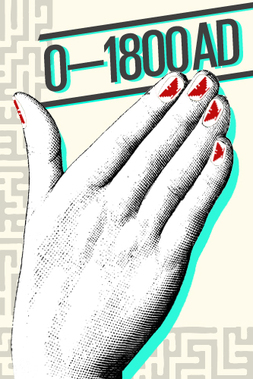 0-1800 AD: For a long period during the Middle
Ages, manicures were considered a thing of the past. The Dark Ages, indeed! It was during the Renaissance that the old tradition of manicuring nails was finally taken up again by wealthy European women — although they made sure to avoid any pigment. However,  oceans away, the 15th Century Incas invented "nail art" as we know it — decorating their nails with intricate pictures of eagles. 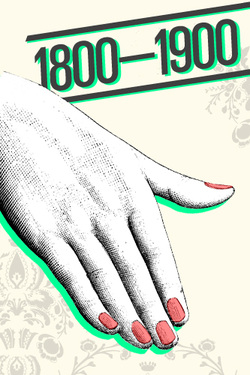 1800-1900: Manicures were popular once again during the Victorian age with a simple treatment of a light tint of red oil. This minimalistic treatment was in part due to the Victorian ideals of transparent innerbeauty, physical  hygiene, and moral purity. 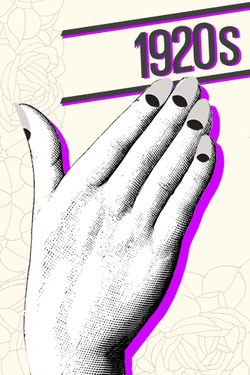 1920s: It was the irreverent flapper of the '20s who, decked out with new clothes and a new attitude, reinvigorated the nail scene with the old-school red as well as the moon manicure. 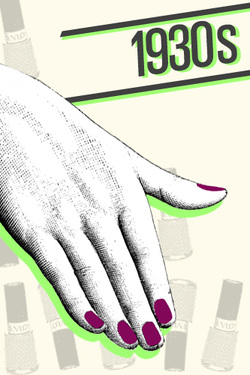 1930s: In 1932, the first bottle of Revlon's nail polish hit shelves in colors never seen before — making fashionable nail options more accessible than ever before, adding some economical style during the Depression. Polish as we know it also came from this era due to a new way of thinking — to stop staining the nail and coat it with hard enamel instead. The revolutionary idea had come from a French makeup artist, Michelle Menard, who was inspired by automobile paint. The new polish was concocted by the Revson brothers and a chemist Charles Lachman. 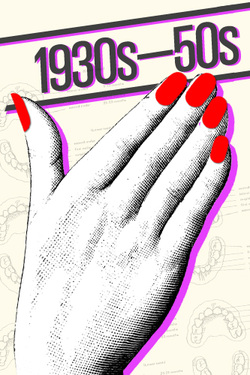 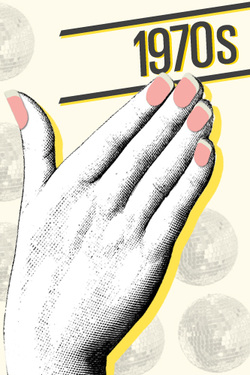 1970s: The practice of applying long fake nails became widespread. To match the demand for expert manicures, beauty salons opened at an even higher rate. In 1976, American Jeff Pink created one of the most well-known manicures for busy Hollywood starlets: The French Manicure. 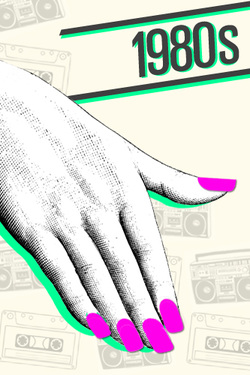 1980s: There was a lack of inhibition in fashion in the '80s, and so too did nail polish colors skew…a kaleidoscope of nail varnishes were made available, from neon yellows to glowing fuchsias to shocking blues. 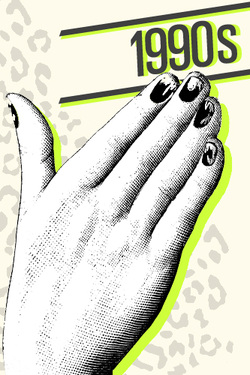 1990s: The minimalist '90s brought traditional colors like reds, nudes, and pinks back en vogue, though the grunge fans had their moment to shine, too; Look anywhere, and you could spot chipped, black nails filled in with Sharpie markers. 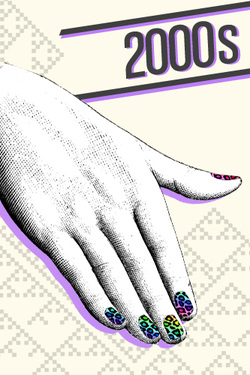 2000-2013: With cool textures, sheens, and nail embellishments resulting in designs from ornate to just plain futuristic, there has been an unprecedented level of interest in nail art as well as the nail industry. Nails have become part of the whole outfit, with adhesives providing a never-before-achieved level of intricacy to manicure designs. Innovation in nail technology also has continued with the 2007 invention of Minx stick-ons. Creative Nail Design's Shellac also came out in 2008 with the first gel polish, aka the 2-week manicure. The past decade, DIY nail art reigned supreme, with nail enthusiasts skipping the salons and trying out (and blogging) a myriad of different   homemade designs and effects.
***Pictures and facts courtesy of Gloria Cheng.***